I will start and say this was the third transversary I have celebrated. All of them at Bone Fish Grill. The first two were My One Year Mark of Transitioning Celebration and Stephie’s Two Year Birthday Celebration. One year of transitioning was the first. My two years as Stephie was the second, and perhaps the most important of the three transversary because that day celebrate when I finally recognized that I was a woman. It was actually a double celebration because I got my legal name change the day before.

So, my third transversary celebrates when I started cross hormone therapy (more commonly hrt), and I was celebrating the first year mark. I have written about the results of this at one year in a separate post (One Year on HRT). I will just say here that I am pleased with the results so far. And, I was doubtful that it would be this good. Beginning hrt is a big day in most transgender persons’ life. It was probably the culmination of a lot of thoughts, research, for many therapy, finding a prescriber, going to your first visit, blood work, and then finally going to the pharmacy (unless you have them delivered) and picking up your prescriptions, and finally taking that first dose (Gulp). This a day of celebration, and so is any yearly mark (I suppose it can get old), and the first year, especially.

This was me all dolled up after much of the usual clucking and fussing and possibly a little bit more than usual. I am proud that getting ready like this takes me less time and far less time than the first transversary. I wore this dress for first time that day. I bought it kind of as an impulse buy because when I saw it on Amazon I wasn’t looking for a dress, just a skirt. Well, the next day it was in my cart and ordered. I bought it back in January, and this was the first time wearing it out.

So, Bette (my partner) and I once again went to Bone Fish Grill, which has been super accepting of my transgender status. Our reservation was for 4 pm and we arrive a bit before that, but they seated us immediately in a booth with a window (not much of view but . . .). I announced to the hostesses that I was having an anniversary celebrating one year on cross hormone treatment. They were both happily accepting. Once seat the waiter was at our table in less than 5 minutes. I made the same announcement to him, and once again was greeted with full acceptance.

I had an ice tea and Bette had a Diet Coke as she does most often when we go out to eat. They had a special – butterfish (black cod) with crab on top. Bette order the grilled shrimp and sea scallops. The butterfish is well named as it has a very silky buttery texture. I had only had it as sable, the smoked version of black cod which I absolutely love. For dessert we split a macadamia chocolate brownie with ice cream and whipped cream and surrounded by raspberry sauce.

It came with a lit candle as requested: 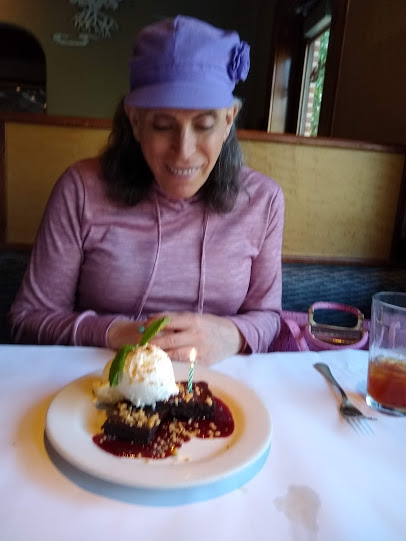 After dessert Bette gave me a card and and a present (two glossy pink lipsticks – not pictured): 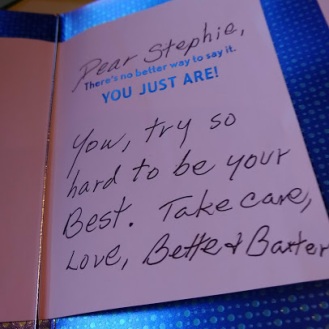 I think you can tell I was enjoying myself immensely. And I did. Once again I had a blast—the greeting, service, meal, dessert, card and present were absolutely wonderful.

After we left Bone Fish Grill we went to Giant, so I could by an Amazon gift card with part of the money Bette had tucked under the inner flap of my card (she will do this a lot). I picked up the gift card, some cat food, and sodas as Bette waited in her car. When I went to check out the checker complimented me on my nails (I had bought some press-on nails the day before, and this was the first time ever wearing fake nails:

I just had to share with her that I was celebrating my first year of cross hormone treatment (everyone I told was young and knew what I meant). She was really cool with it and shared with me that she was bisexual.

Afterwards: I did not do anything special for Transgender Day of Visibility except go grocery shopping, but it was in stealth (I did not share my transgender status with anyone that day). But, I have openly shared my one year mark of being on hrt not only with the restaurant staff and grocery clerk, but a number of others including a worker at Walgreens when I went to get some of the pics printed. So, while I missed the dedicated day to be bold and show myself to the world, I did it in spades when I celebrated my first year on hrt.

4 thoughts on “My Transversary Celebration of One Year on HRT”

I am a transgender woman, and I love to write among other things in my life. View all posts by StephieGurl